Historical note:The flag above is the flag of the Indian Empire- India at the time of the events below covered the area that now comprises India, Pakistan, Burma(now Myanmar)and Bangladesh(formerly East Pakistan).
SPARTAN VT-AAT 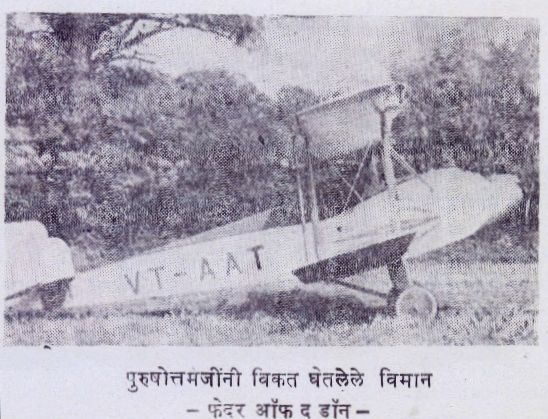 In 1930 a gentleman from India, Purshottam Meghji Kabali , took delivery of Spartan VT-AAT(c/n 31), with the intention of flying the aircraft home to India.

Mr Kabali is believed to have been the first Indian pilot and subsequently went on to fly for "Air Services of India Ltd",which operated Dragon Rapides and Dc-3s in the forties and early fifties before merging into Indian Airlines Corporation in 1953.

Mr Kabali was attempting a very long flight in a very small aeroplane at a time when such flights were still far from commonplace.

He named the aircraft "Feather of the Dawn" and a religious ceremony was carried out at Croydon Airport before departure (Picture below from Kelvin Osborne).In the picture Kabali is by the nose of the aircraft, the lady is Sarojini Naidu , author of a book of poems by the same name as the aircraft.She was a prominent member of the Indian independence movement and was arrested and imprisoned shortly after the event shown in the photo.She later became Governor of Uttar Pradesh - India's first woman governor .Other guests at the ceremony were the Maharani (Queen) of Cooch Behar (a princely state in India), Ex-British Prime Minister Lloyd George, Sir Dorab Tata father of J.R.D. Tata founder and Chairman of Air India , and his wife Lady Rattan Tata., 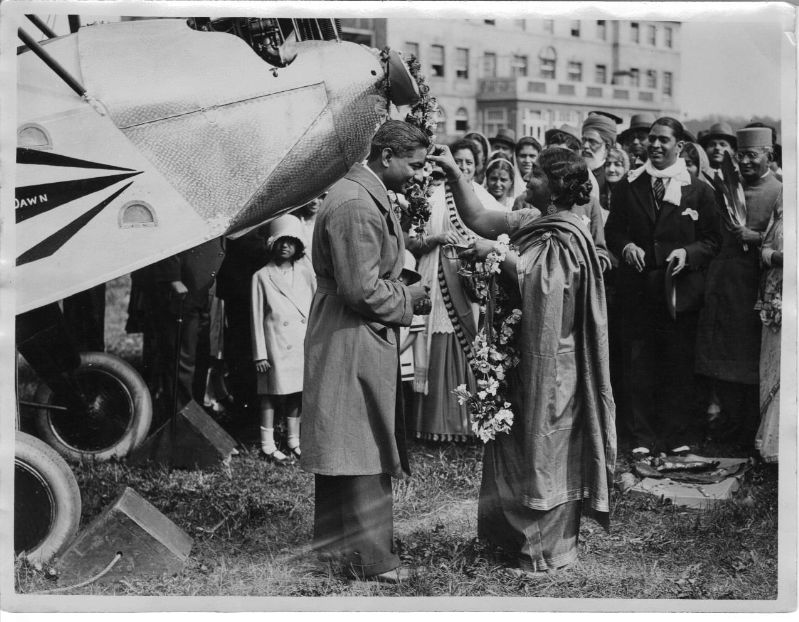 ~
The proposed route shown in the map below was Croydon-Paris-Marseilles-Pisa-Rome-Tunis-Tripoli(Libya)-Aboukir-Gaza-Basra-Bushire-Bandar Abbas-Jask(Iran)-Charbat(Turbat?)-Karachi(pre-partition - Karachi was in India). 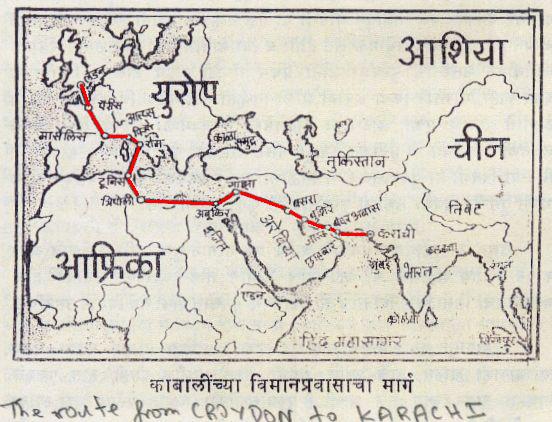 The aircraft departed from Croydon and apparently all went well until somewhere between Tobruk and Tripoli(in Libya)where the aircraft crashed after getting caught in a sandstorm.As far as is known P.M.Kabali suffered no serious injuries.

The two pictures below show the aircraft immediately after the crash(left) and the aircraft loaded on a truck for transportation(to where?).From the look of things the truck was having puncture problems. 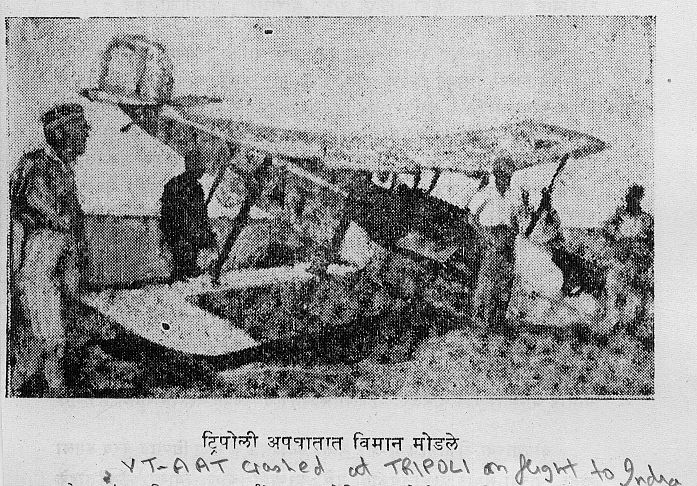 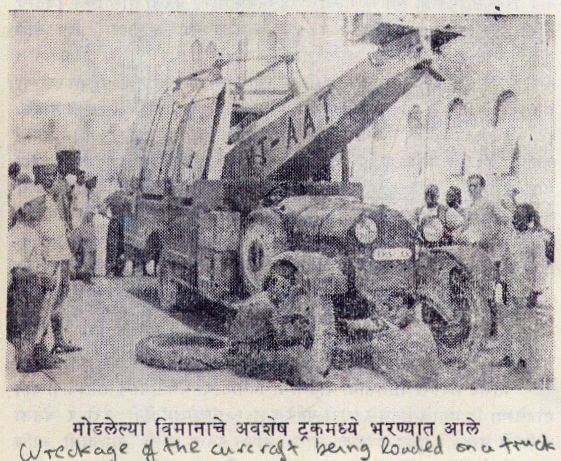 I am indebted to Captain Herman Vinayak of Mumbai, India(who provided the photo above) for the information above.Captain Vinayak a retired airline pilot, has been researching Indian aviation for many years and , after considerable effort , traced the granddaughter of P.M..Kabali.

Gyatriben Kabali sent Captain Vinayak a copy of a book written in Marathi language by the late Gajanan Shankar Khole The title is "KABALI VAIMANIK"and cover of this book is shown below.Mr Khole met P.M. Kabali personally on a number of occasions to gather material for the book, which was meant to be a rapid reader for school children studying in the Marathi medium of instruction. 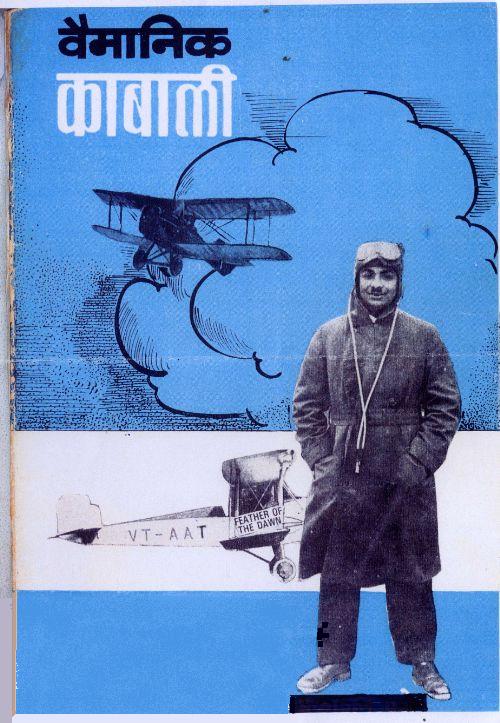 Below left is a photo of Purshottam Meghji Kabali, and on the right - a reproduction of an "in memoriam" that has appeared annually in the Times of India on the 17th of January. 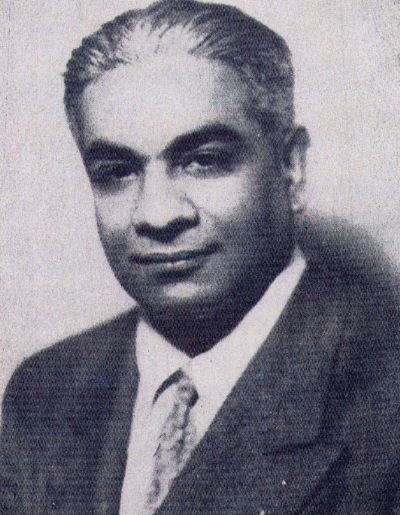 Below is a photo of B M Damania's Pilot's Licence (Photo from Ardeshir B. Damania. 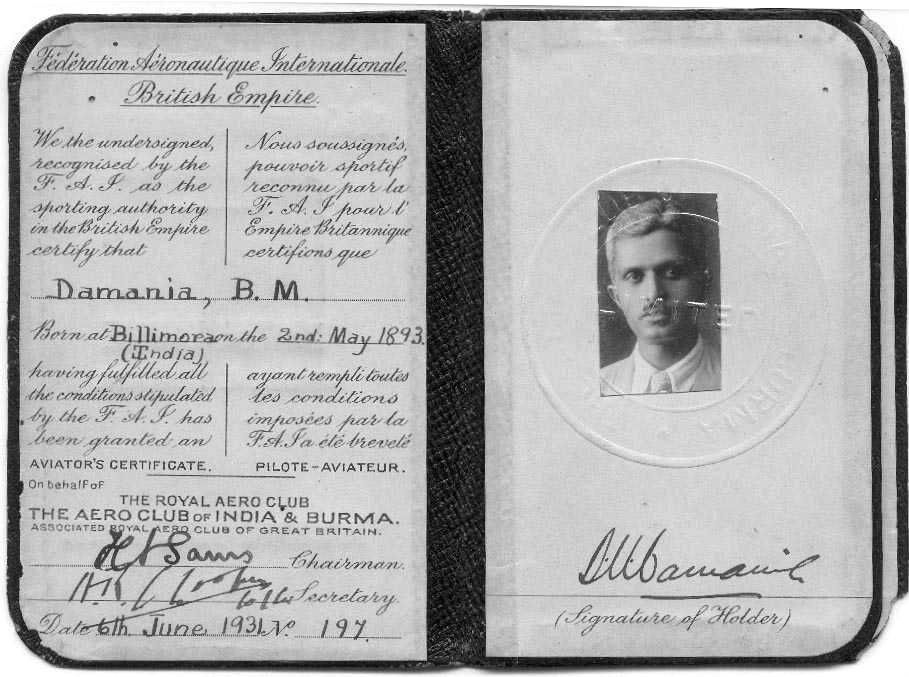