Shown below are three pictures(complete with original handwritten captions) sent to me by Dennis Gray.They show the Spartan VH-UKQ. This aircraft was flown in Papua New Guinea, with Guinea Airways, by Dennis's uncle William T. Gray( who was also the photographer)in the late 30s.

The first picture , dated March 1936 shows the aircraft at Bulldog Aerodrome(Papua), whilst the other two pictures show the aircraft after a forced landing on the beach at Salamaua on 11th December 1935. The forced landing was caused by an engine failure due to " broken con rod thru' cylinder".

Below the photos I have included some extracts from an Email sent to me by Dennis (with the pictures) which gives some idea of the sort of "seat of the pants" flying that prevailed in Papua at that time. 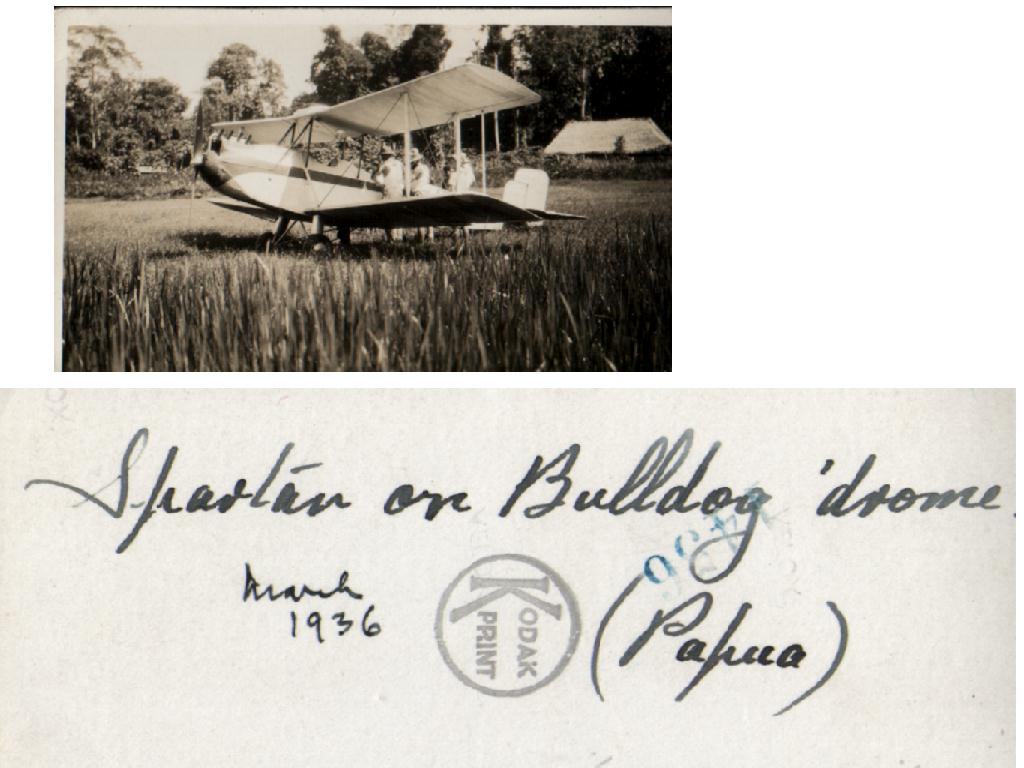 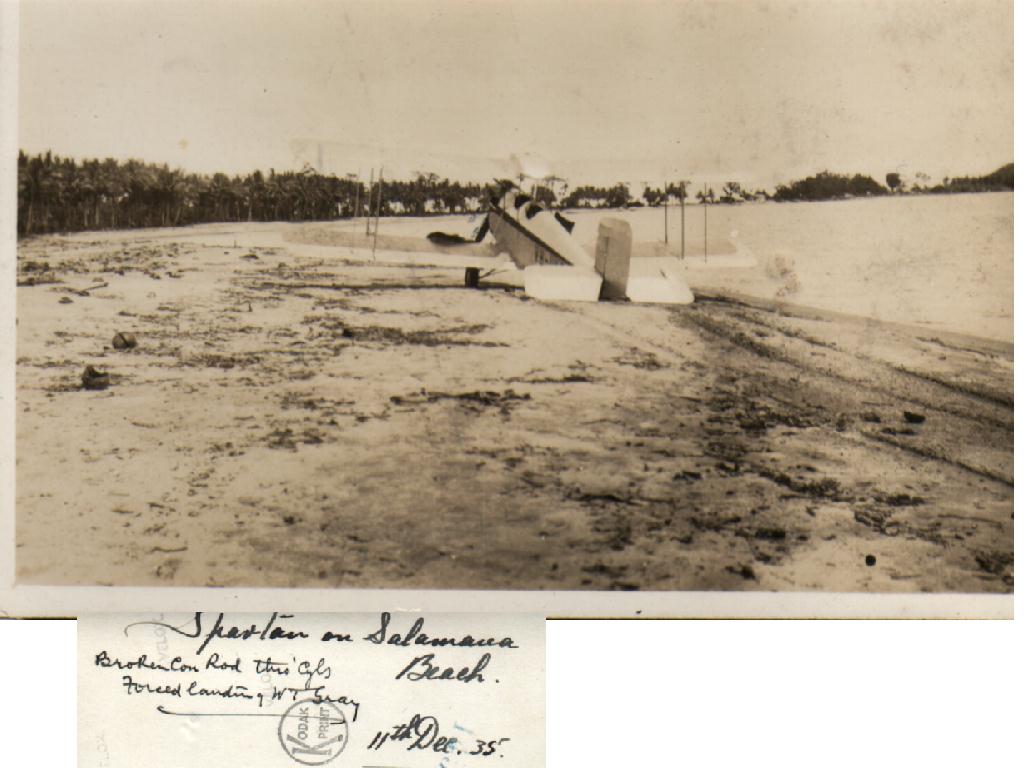 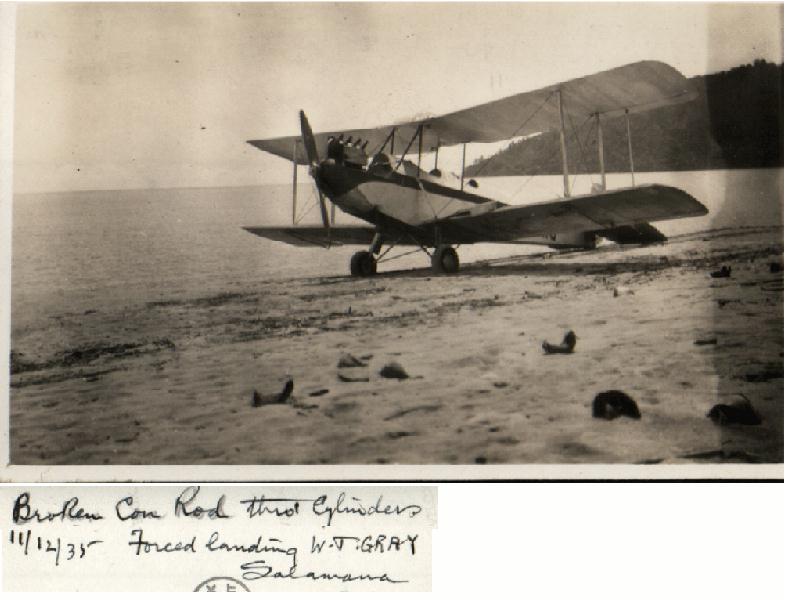 "My uncle, William T. Gray was a very avid photographer, so much so that he had a special kerosene refrigerator just for his photographic gear when he lived in New Guinea 1935 to 1941. Some people had beer fridges. I believe no beer went in that photographic fridge.It went into the normal fridge

He took (as far as we know) the only 16mm colour movies in New Guinea before the war. I have a one hour video of that. It is a collection of clips of life and flying with Guinea Airways. It's obvious that he often was sparing with the footage from the short clips, but there are some magic sequences of loading the Junkers G31's (trimotor) through the roof hatch (11' X 6') and a couple of good sequences of the famous stream crane that ran on a rail line from the Lae aerodrome over half a mile to the sea carrying a Junkers W34 (monoplane) and Stinson Reliant that had been fitted with floats. There are no movies of the Spartan.

Bill would have landed up either in management of whichever airline he was in or high up in the union. He and my father (Bill's younger brother) were studying the latest technology as it became available together. They were both in Guinea Airways. I have some of the books they had sent from the USA . We have a draft of a letter sent to the management of G.A. which Bill was pointing out a number of dangerous activities the airline was conducting during the war ... (balanced field length for Lockheed 14s, crew rest periods, maintenance opportunities on the too short turnarounds) My father went on to become Chief pilot of TAA, Bill got splattered onto a Northern Territory stony ridge in a tropical downburst in 1942 while trying to do a precautionary landing in failing light and next to no fuel.

This was his third "crash" so the family weren't overly worried on first hearing that he was down. The first was the Spartan at Salamaua, and the second was in a Gipsy Moth in the mountains of New Guinea. His prop hit an eagle and flew to pieces. He plopped it down in the tree tops and the aircraft fell to the ground. Bill hopped out and walked back to Sunshine (gold field) to let them know he was OK We have photos of the crash with his airy caption "How to land a Moth" on the back. Our grandfather added "Eagle smashed propeller" so no one would think HIS firstborn had made a mistake.

The Lockheed crash was instant. We have crash investigation photos of far flung wreckage not consistent with clipping trees in a controlled landing. They were taking ten US airmen from Brisbane to Batchelor and got caught in the tropical afternoon storms. The radio compass was useless with all the storms and they finally spotted the ground which was water (The Arafura sea). Realizing they'd gone too far they went on the reciprocal heading and still couldn't find where they were so sent a morse message that they were doing a precautionary landing while they still had fuel.

It took six weeks to be found. I can see extended flight times in my father's logbook on the relevant leg of his flights over the six weeks where he'd done some searching on the Adelaide Darwin courier runs they were doing. There are also a number of 20+ hour entries in his logbook in that period where he'd flown Adelaide to Darwin and back on courier runs.

Back to the Spartan... Bill flew it for 180 hours in New Guinea. We don't know his opinion of it, but in Wings of Gold" by James Sinclair the aircraft seems to have been not popular and one pilot who'd been hired to fly Gipsy Moths on being told he'd be flying the Spartan, quit!

It is a good read. Bill's mentioned and so is my father (Charlie) although they spelt Bill GrEy and attributed two crashes to my father who "went off" on reading it and denied it was him. He did however "bend" two aircraft which were quickly repaired. One was a Gipsy where he hit a bulldog walking across Wau strip as he took off. Wau was a steep down hill strip, so you were committed when you opened the throttle. He went on to Lae and the engineers replaced the bent undercarriage leg and were pleased that bloody nuisance of an animal had finally been killed... it was a well known dog. On landing back at Wau he almost collected the dog as it wandered unconcerned across the strip again.

The second was a Fox Moth which got caught by the infamous afternoon crosswind gusts that frequented Bulolo and he hit a log in the long grass on the side of the strip and he bent the undercarriage and went onto his nose. We have stills of that and a movie of the carrying of the wingless, engineless airframe by about fifteen natives up to a Ju31 and it's loading by